Located in Jacksonville, North Carolina, Camp Lejeune is a 246 square mile Marine Corps base opened in 1941.  The base’s water supply was contaminated shortly after opening.  The contamination was due to poor chemical disposal practices of an off-base dry-cleaning service and leaking fuel tanks.  Between 1953 and 1987, over one million Marines, families, and civilian workers were exposed to toxic water.  At least two of the base’s eight water treatment plants were contaminated.

The chemicals are known as volatile organic compounds (VOCs).  These chemicals include: perchloroethylene (PCE), a dry-cleaning agent, trichloroethylene (TCE), an industrial degreaser, and benzene, a component of gasoline.  The Agency for Toxic Substances and Disease Registry (ATSDR) performed studies on the base water supply in May 1982.  They found TCE contamination as severe as 1,400 parts per billion (ppb).  The accepted limit for TCE in drinking water is 5 ppb.  The contaminated water was used for everything from bathing to drinking.  The Marines and their families were literally soaked in chemicals.

In 2012, Congress passed the Caring for Camp Lejeune Families Act making free healthcare available to Camp Lejeune veterans and their families suffering from a list of fifteen diseases.  To be eligible for treatment, a veteran must have been stationed at Camp Lejeune for at least 30 days between January 1, 1957, and December 31, 1987.  Additionally, VA also provides reimbursement for out of pocket expenses of qualifying family members of veterans who were also exposed to the water at Camp Lejeune.

The fifteen disease are as follows:

The Act provided medical treatment for these diseases, however, it did not address service-connection for the same.  The Act failed to create any type of presumption.

However, in 2017, the VA took another step forward in helping those veterans who were exposed to toxic water at Camp Lejeune.  They developed a list of presumptive conditions for service-connection.  The list is shorter and only includes eight diseases.  They are as follows:

The VA has conceded the nexus requirement by making the decision that the above conditions are related to the toxic water at Camp Lejeune.

The presumption is only applied to claims pending at, or after, the date the time it went into effect, March 14, 2017.  The presumption does not apply retroactively to finally adjudicated claims.  If you were stationed at Camp Lejeune during the presumptive period, have previously been denied benefits for a presumptive condition, and you are outside of the appeal period), you need to reapply for benefits. 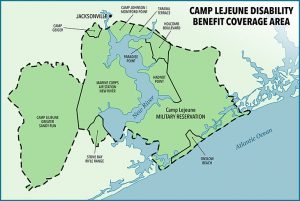