Many veterans of the Gulf War Era (Persian Gulf, Operation Enduring Freedom, and Operation Iraqi Freedom) suffer from a multi-symptom undiagnosed illness.  “Gulf War Syndrome” is the name commonly applied to the condition.Gulf War Syndrome is commonly attributed to exposure to multiple biological, chemical, and environmental hazards.  Gulf War Syndrome by its nature is one of the most difficult disabilities for which to obtain service connection.  For this reason, Congress enacted special rules relating to Gulf War Syndrome.

Service in the Southwest Asia Theater of Operation includes:

An undiagnosed illness can manifest in numerous ways.  The first, and most obvious, is the symptoms of such an illness.  Symptoms vary from muscle and joint pain to fatigue, headaches, neurological symptoms, cardiovascular symptoms, respiratory problems, sleep disturbances, abnormal weight gain or loss, and gastrointestinal problems.  It is important to remember in the case of undiagnosed illness, veterans can rely on lay (buddy) statements regarding their symptoms as long as non-medical professionals can observe the symptoms.  These symptoms must also be chronic in nature.  The VA defines this as symptoms which have existed for 5 or more months without a formal diagnosis.

The second way a veteran qualifies for service connection for Gulf War Syndrome is a medically unexplained chronic multi-symptom illness such as chronic fatigue syndrome (CFS), irritable bowel syndrome (IBS), or fibromyalgia.  In order to qualify for disability for one of these illnesses, you must, have a diagnosis.  In addition to these, there are nine additional diseases which fall within the special rules for Gulf War Veterans:

Additionally, if and when a veteran is service connected for one of the preceding nine diseases, VA regulations recognize certain long-term  effects which may entitle the veteran to secondary service connection.

The final requirement for service connection for Gulf War Syndrome is the disability must have manifested during active military service in Southwest Asia or to a degree of at least 10 percent since the veteran’s return for service.  The presumptive period varies for the additional nine diseases.  Fibromyalgia, irritable bowel syndrome, and chronic fatigue syndrome each have their own diagnostic code, it is easy to determine if you meet the 10 percent threshold.  For the additional conditions, rating is more difficult because the VA uses what is referred to as analogous ratings. 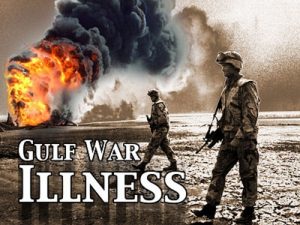